Dr. McEuen will give a talk on "Microscopic Robots?" at this free, public event. 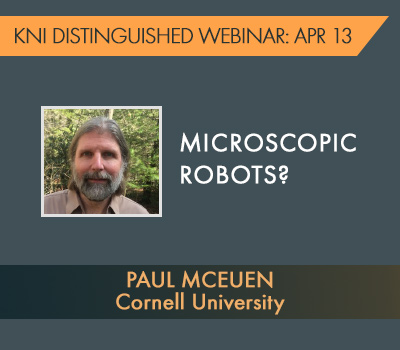 This event has passed. Watch the webinar on the KNI YouTube channel here.

Can we build microscopic robots? If Nature can do it, why can't we? The brains are not the problem: a modern IC has tens of thousands of transistors in the area occupied by a paramecium. But two major components are missing: electronic actuators that can operate as the robot's micro-appendages, and a power/communication system for getting energy/info in and out. In this talk, I will discuss work by an interdisciplinary team at Cornell to solve these problems. We first created OWiCs, or Optical Wireless Integrated Circuits, that use light for comms and power. OWiCs are smartphones for the micro world, with potential applications in everything from implantable sensors to microscopic ID tags to the brains of a microscopic robot. For appendages, we developed a new class of electrochemical actuators called SEAs that readily flex on the micron scale. We then integrated SEAs with OWiCs to build our first prototype microscopic robots, which now hold a Guinness World Record for the Smallest Walking Robot. But what are they good for? To quote Benjamin Franklin: "What good is newborn baby?"

Dr. Paul McEuen is the John A. Newman Professor of Physical Science at Cornell University and Director of the Kavli Institute at Cornell for Nanoscale Science. His research explores the electronic, optical, and mechanical properties of nanoscale materials; he is currently excited about using these materials to construct functional, intelligent micron-scale sensors and robots. He is also a novelist, and his scientific thriller SPIRAL (featuring tiny robots) won the debut novel of the year from the International Thriller Writers Association. He is a fellow of the American Physical Society, the National Academy of Sciences, and the American Academy of Arts and Sciences. He is also the co-founder of OWiC Technologies, an early-stage startup commercializing the Optical Wireless Integrated Circuit platform.

Dr. McEuen earned his B.S. in Engineering Physics in 1985 from the University of Oklahoma and his Ph.D. in Applied Physics from Yale University in 1991.

Please see the our seminar series webpage for updates on future speakers as well as links to recordings of previous seminars.