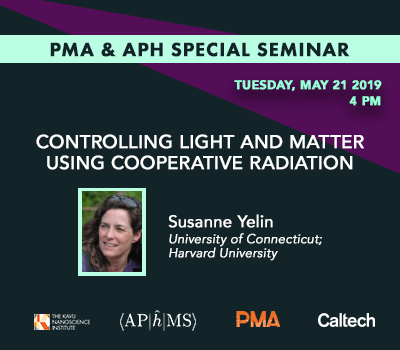 Susanne Yelin, professor of Physics at University of Connecticut and senior research fellow at Harvard University, will be giving a special seminar at Caltech on Tuesday, May 21st at 4 pm. A light reception will be held afterward. Her talk is titled, "Controlling Light and Matter using Cooperative Radiation".

It is well known that spontaneous emission, typically assumed to be an independent process for each atom, can be correlated due to the interference of light emitted by different atoms. Over the past five decades, cooperative radiation phenomena such as Dicke's superradiance has been explored in systems ranging from individual atoms to black holes.
Recently, such cooperative radiation emerged as a promising method for manipulating light and matter in systems ranging from unordered gases to ordered atomic arrays to two-dimensional semiconductor materials. For instance, cooperative effects can lead to entire manifolds of protected subradiant states whose decay rates approach zero with increasing system size and to the realization of atomically thin mirrors with exotic properties. Alternatively, controlling the response of the atomic medium by combining spontaneous emission with strong, long-range interactions could be used to control entangled many-body states of atoms. I will discuss several theoretical ideas, ongoing experiments to implement them, as well as potential applications of such effects, including realization of topological optical systems, quantum nonlinear optics, molecule cooling, and quantum information processing.

Susanne Yelin is Professor of Physics at the University of Connecticut and Senior Research Fellow in the department of Physics at Harvard University. Yelin received her doctorate in Munich, Germany, doing theoretical quantum optics with Axel Schenzle, staying also in Texas with Marlan Scully. After a postdoc at ITAMP, she joined the faculty at University of Connecticut (UConn) in 2002 and is now dividing her time between UConn and Harvard University. She is also a principal investigator at the CUA (NSF Center for Ultracold Atoms). Yelin received the 2013 Willis E. Lamb Award for Laser Science and Quantum Optics and is a Fellow of the American Physical Society.